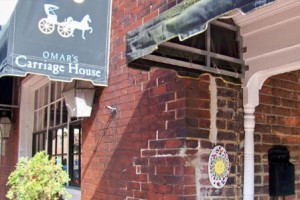 The building is a historic site in Norfolk. The Original Carriage House was built in the early 1840’s. Its patrons then were horses. From the first floor, if you look up at the center of the room, you’ll see the large opening where hay used to be loaded into carriages.

A 19th century timber merchant, Captain John L. Roper, bought the property after the Civil War. The family carriage, horses, riding equipment, and even a sleigh were kept here in the carriage house. The family’s mansion, facing Freemason Street, was demolished in the 1930’s. For years, the old carriage house stook idle until one of Mr. Roper’s granddaughters decided it would make an ideal tea room.

In the mid 1940’s Virginia Bruce Roper converted the facility into a restaurant. It’s reputation grew as a quaint tea room where good food and good friendship were regularly enjoyed. Artists and celebrities frequented The Carriage House. Among them, Mrs. Douglas McArthur returned in 1980 and was pleased to find that the Pecan Pie a la Jan had been improved.

In 1974, new owners turned the business into a night spot known as “Round the Corner.” Old recipes and ties to the origin were abandoned for sandwiches and liquors. Repurchased again in 1978, it was renamed back to The Carriage House, renovated, and returned to its original menu, including aged, seasoned beef, and fresh seafood. After yet one more owner, Omar Boukhriss purchased “Maude’s House” in 1998, once again restoring the “Carriage House” and its traditions.

A curious old legend lingers of a ghost that lurks the Carriage House halls from days of dinners past. It is said to be the wispy ectoplasm of a pre-Civil War slave with a penchant for playful service. Menus move, the lights dim, friends hear funny things…and wine mingles the soul. Who knows, maybe there’s more to the savory vapors of good food and the sentient spirit of good friends than meets the eye!